Let’s go back in time and imagine!

[The story starts in the 8th century BC] It is middle of the night and you are lying on your pallet in your cell. It is another stormy night on the sea, and you cannot sleep again. Maybe this trip was not the best idea. But it seemed so promising back at home: new place, new women, being a conqueror, having the glory!

You have no idea how much time did you spend on the Mediterranean Sea, but you finally reached your promised land. It is similar like at home. Good, it will be easier to get used to live here. You are proud to be part of this Greek colony, because you can reach also the unreachable. But there is something here, what you did not have at home. The fire splitting beast above you, the Etna.

With time you keep good relation with Magna Graecia. You can never know when will it be useful to have such a big brother.

Let’s jump a bit in time. Just about 300 years. There is this other city on the island, Siracusa, which has this Hieron. He wants to rule on the whole island, but you did not come here to be ruled by someone on the other side of the island. He tries to expell all the original Catanaeans from their city. But you are smarter! And anyway it does not last long. With his death, the others also comes back to Catania. Everything is calm as long as the big brother does not appear. Athenians arrived to your walls. Of course you don’t want to let them in, but what can you do? They want to rule Siracusa, and for that they need a base on the island. It’s handy to chose Catania for this purpose.

Later on [403 BC] Siracusa finally occupies your city. They do not treat well the locals, all your friends are sold as a slave. You try to protect your home from the Carthagians, and fight for independance in the endless wars.

And then the Romans came [263 BC]. Catania is one of the firsts who falls in Sicily. Thanks to your good relation with Rome, Catania becomes a flourishing city, with rich market. Also thanks to the fire splitting beast, your fields are giving you good vegetables and wine.

Bit more than a hundred years later everything goes wrong [121 BC]. The beast started to split fire. The melted fire was running down on the hill and covered and destroyed the whole town. You were watching this from your boat. All your precious lands and goods are gone now. No more wine, no more fruits, no more fountains in your green garden.

Till 440 the town reborn. But then you have protect it from the Vandals of Gaiseric. Your life is full of different rulers of the town. After the ostrogoths, Eastern Roman Empire (=Byzantine Empire) gets back your beloved city, and owned till 9th century.

Then you have something new! After Byzantine governor of Sicily, the islamic emirate arrives till 1072. On Piazza Duomo, there is Basilica Cattedrale Sant’Agata which you constructed between 1078 and 1093. Then you are just struggling under normans and germans. In 1282 you take part in the revolt against the Anjous. War after war, Catania loses its capital role and in the 16th century you find yourself under the rule of Spain. Then of course, you take part in the rebellion against the foreign government.

And then in 1669 the beast grabbes the rule again. Now you can survive it easier, because the city wall does its job, and protects the city. But the port ends up worse. Worse comes in 1693, when an earthquake destroyes the city, and you also help to rebuild it in baroque style. These events were also source for the main building material, the tuff.

Chiesa San Benedetto also ruined in the catastrophy, but after you rebuild it, it gets lovely baroque frescos. You are building not only houses, and buildings, but also other esthetics too. You just finish Porta Uzeda in 1696, and Fontana Dell’Elephante is dated back into 1736. Towards the sea, you pass by Palazzo Biscari. If you continue your walk towards the Palazzo degli Elephanti, and walk a few more minutes, you will end up at Piazza Universita. If you go on, you will reach Basilica Collegiata. A cute little church is Santuario Sant’Agata al Carcere. For a bit of rest and nature, you always visit Giardino Bellini.

In 1866 you finally finish the construction of Monastero dei Benedettini which is already that time one of the must see main attraction in Catania. It’s an island of peace in the running city. In the shade of the monastry, you have to see the Chiesa di San Nicolo All’Arena. Fontana dell’Amenano is finished also around this time.

In the 19th century you finally can get back to your roots, and Sicily becomes part of Italy. In 1940 you can luckily survive the repeated bombings by running away to the surrunding villages, and in 1943 Britihs Army liberates your island.

The city has an underground river (Amenano), which comes up to the surface only at one place. If you wish to visit seaside, and be active, the best is San Giovanni Li Cuti, with its climbable rocks and clear water.

In modern times you still didn’t stop developing the city. Museo Diocesano Catania is a proof for that. 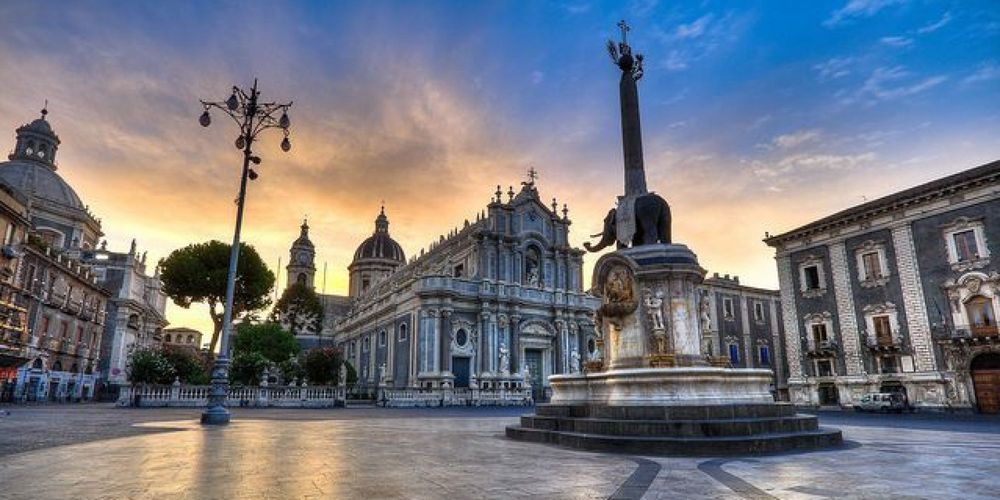 Background of the trip

Actually, I started to travel late. My family’s financial background didn’t make it possible to travel. When I was born, back then also political situation of Hungary wasn’t too stable, it wasn’t too common to go abroad.

My grandpa was a geologist engineer, he had tons of maps, atlases, and albums of different parts of the world, so I got amazed of travelling already at early age. I wanted to see everything! All the places, all the secrets, all the people.

And in 2006 the ice broke. My highschool’s french drama group got an invitation to Sicily to a festival. No, I didn’t play, but a few places left on the bus, so obviously my highschool wanted to fill that up. So I went 🙂

MAP: https://drive.google.com/open?id=1356aWVE-FXwQdNVbo1a8Zh-44qeEd8no&usp=sharing
tick Catania on the left side